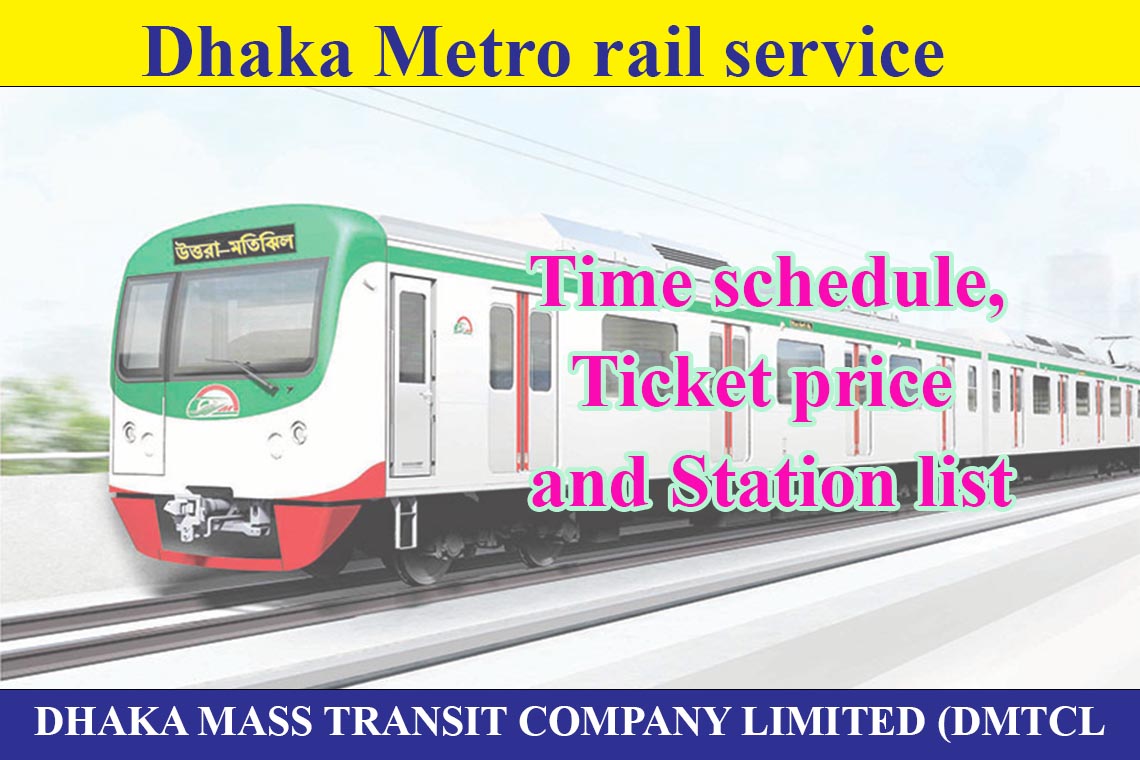 The train will be able to carry 60,000 passengers an hour through 16 stations. Mass Transit Company Limited was given the responsibility to implement the railway line. The trial operation started on Sunday at around 11:54 am by waving the green flag, which was inaugurated by Obaidul Quader.

What is Dhaka Metro rail service?

Bangladesh has launched its first metro rail service to ease traffic congestion in the capital Dhaka, one of the world’s most congested cities. Dhaka Metro rail, also known as the Dhaka Mass Rapid Transit (MRT), is a proposed mass transit system for the capital city of Bangladesh, Dhaka.

The project is being developed by Dhaka Mass Transit Company Limited, a government-owned company.

The proposed metro rail system is intended to alleviate the city’s severe traffic congestion and improve public transportation for the growing population. The planned network for the Dhaka Metro rail consists of several lines, with a total length of about 138 kilometers.

The first line, known as the MRT Line 1, is planned to be a 23.1-kilometer elevated corridor that will run from Uttara in the north to Motijheel in the south, passing through the central business district and other major areas of the city.

Metro Rail MRT Line 2 is planned to be a 35.4-kilometer underground line that will connect the city’s eastern and western sides, running from Mohammadpur to Gazipur.

Construction of the Dhaka Metro rail is expected to take place in several phases, with the first phase involving the construction of the MRT Line 1. The project is being funded by a combination of government funding and private investment.

It is expected to significantly improve the city’s public transportation system and help reduce traffic congestion once it is completed.

For the time being, the Dhaka metro train will operate directly from Uttara to Agargaon, with no stops in between. Service time is 8 AM to 12 PM ( 4 hours) and the weekly off day is Tuesday.

How to buy a Dhaka metro rail ticket?

DMTCL Managing Director (MD) MAN Siddique told Bangla Tribune that from December 29. rapid passes and general tickets can be collected from the counters.

However, there are two systems for ticketing for passengers who want to travel through metro rail in Dhaka — automated and manual.

In the automated system, passengers can get their tickets by themselves but one passenger will be allowed to get a maximum of five tickets at a time.

However, based on information provided by the Dhaka Mass Transit Company Limited. it is expected that the Dhaka Metro rail will offer a variety of ticketing options, including single-journey tickets, round-trip tickets, and multi-day passes.

It is likely that tickets for the Dhaka Metro rail will be available for purchase at ticket vending machines located at the stations, as well as at ticket counters.

Moreover, To purchase a ticket for the Dhaka Metro rail, you will likely need to select the type of ticket you want, pay the appropriate fare, and either receive a physical ticket or have the value loaded onto a smart card or transit pass. You will then need to present your ticket or card at the turnstiles or fare gates to access the system.

All prices are fixed after the committee is formed to fix the ticket price. The station names and ticket prices have been arranged here. The minimum fare for Dhaka metro rail was fixed at Tk20 and the maximum fare for traveling from Uttara to Motijheel at Tk100.

Besides, from the first station Uttara North to Pallabi and Mirpur-11 stations, the fare will be Tk30, the fare till Mirpur 10 and Kazipara stations will be Tk40 and till Shewrapara station it will be Tk50.

Moreover, Dhaka Mass Transit Company Limited (DMTCL), which is responsible for the operation and maintenance of the metro rail will be provided a 10 percent discount if the fare is paid by a smart card.

Take a look, Dhaka Traffic Coordination Authority (DTCA) has published the fare list of how much money will be required to move from one station to another station.

Meanwhile, The metro train will stop at 17 stations, and the stations will be as modern as it gets with all the required facilities. All the nation names are listed here.

However, The Dhaka Metro rail is a proposed mass transit system for the capital city of Bangladesh, Dhaka. The project is being developed by the Dhaka Mass Transit Company Limited, a government-owned company, and is intended to alleviate the city’s severe traffic congestion and improve public transportation for the growing population.